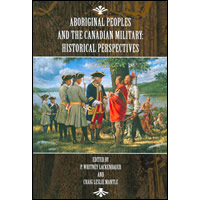 The historical relationship between Aboriginal peoples and the Canadian military have evolved over the last four centuries. This unique volume traces the developments of these associations from the early days of New France to the 21st century Arctic and highlights the important roles that Aboriginal people have played in the defence of the nation: from valued allies, to “specialist” fighters, to forgotten veterans, to defenders of Canada’s north.