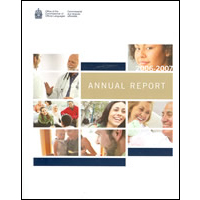 This is annual report on the activities of the Office of the Commissioner of Official Languages. It informs parliamentarians and Canadians about the status of official languages in Canada and contains recommendations to ensure full compliance with the provisions of the Official Languages Act. This report examines Canada’s official languages in terms of political leadership, leadership in public administration, services to the public, language in the federal workplace, and promotion of linguistic duality.