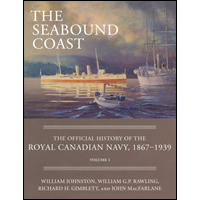 Traces the story of the navy’s first three decades, from its beginnings as Prime Minister Sir Wilfrid Laurier’s “tinpot” navy of two obsolescent British cruisers to the force of six modern destroyers and four minesweepers with which it began the Second World War.