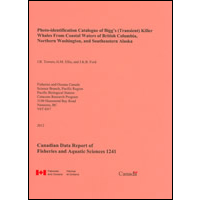 Killer whales are easily recognizable by the appearance of their naturally occurring markings in both photographs and during field observations. This report presents updated identification images and demographic data for Bigg’s (transient) killer whales known from numerous encounters between 1974 and 2012 in the coastal waters of British Columbia, northern Washington, and south-eastern Alaska. These data are intended to facilitate studies and observations of Bigg’s killer whales and serve as a supplement to future publications.