French to follow? : revitalize the official languages in the workplace / by Patrick Boisvert and Matthieu Leblanc; Issued by CCMD Action-Research Roundtable on Official Languages in the Workplace. : SC94-99/2003 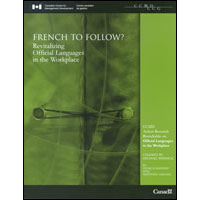 This report reviews progress with respect to official languages over the past three decades, noting that the Official Languages Program in federal government institutions has faltered somewhat over the past decade. The report makes several recommendations for revitalizing the use of official languages in the federal public service, including more extensive investment in language training for middle managers working in bilingual regions and recognition of language training as a key component of learning and career development plans.